‘The average man does not want millinery and gymnastics with his religion; he wants a simple, straight Gospel message’
Vicar, J C Kempthorne Buckley, 1924

St Mark’s Church began life as a ‘church plant’ from Llandaff Cathedral (in whose parish it then lay), meeting for worship in a schoolroom in North Road, Maindy. In 1876, the first purpose-built St Mark’s Church was consecrated, in a prominent position at the junction of North Road and Whitchurch Road. The architectural style was Gothic Revival, fairly typical for the period. At the time, the area was rural, so much so that someone commented that St Mark’s Church would be “an adornment to the beautiful scenery amongst which it is placed”. The vicarage stood next to the church. The church hall was beyond the vicarage, in Whitchurch Road. The whole site is now occupied by part of the Gabalfa roundabout.

The newly created St Mark’s Parish extended from Maindy to Llandaff North, taking its name from Gabalfa Farm opposite the Cathedral (‘Gabalfa’ means ‘the place of the ferry’). The first vicar was John Davis, known as ‘Sporting Jack’ because of his love for hunting. He made a point of visiting his scattered parishioners on horseback, in an attempt to preserve old rights of way.

As the urban area of Cardiff spread outwards, the church became too small, so in the late 1920s the building was extended westwards, up to the edge of North Road.

In 1933, Western Avenue was opened to provide a crossing of the River Taff and the first stage of a city bypass. As traffic increased after the war, the need to complete the bypass became ever more pressing. But St Mark’s Church stood in the way, along with over 100 houses, the Regal Dance Hall and Gabalfa Library. By the early 1960’s plans were already being drawn up for building a new church, and potential sites were being investigated. One possibility was land in Rosemount Place, just north of the present Gabalfa roundabout.

However, the site chosen was the southern part of the grounds of Briardene, an old house then owned by the Ministry of Defence. Construction began on 1st December 1966. By St Mark’s Day, 25th April 1967, the brick walls were on their way up and the wooden portal frame was in place. On that day, the congregation processed from the old St Mark’s and the Bishop of Llandaff formally laid the inscribed stone that is still visible in the church entrance. At a later date, another crowd gathered to watch a crane lift the cross to the top of the tower. The last service at the old St Mark’s church was held on Sunday 28th April 1968. The Bishop returned a year and a week after laying the stone, to consecrate the newly-completed building on 1st May 1968. The sign of consecration is the small stone cross beneath the large wooden cross on the east wall. Construction of the flyover and Eastern Avenue took until 1971, when the Queen came to open them. 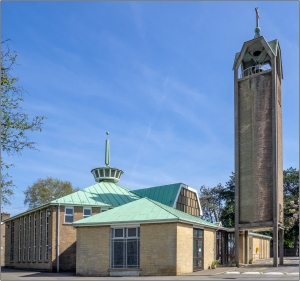 The architects were the Seely and Paget Partnership, of London. Paget’s father was the bishop who ordained Glyn Simon, who was here laying the foundation stone. The main architect was Mr A S B New.

The plans show a public sewer crossing the site, parallel to the north wall. The sewer had to be avoided, which gave the architects the idea of the pentagonal plan. Mr New placed the tower opposite Caerleon Road for maximum visual impact. He drew the main axis of the building at right angles to the line of the widened North Road. The building project was funded out of compensation paid by the Ministry of Transport for the loss of the old church, but economies had to be made to fit the amount available. Chiefly this was by the use of brick and reconstituted stone instead of natural stone. The tower was funded by the church, not the government, presumably because the old church never had one. A list of costs reported in 1970 totalled just over £95,000, including the tower.

The architect J Newman in his book “The Buildings of Wales” made some candid remarks about the design of the new church:

“St Mark’s church … was built to designs of architects Seely and Paget, planned for participatory worship and designed in an over-elaborate modern idiom. It has a pentagonal plan and is constructed on ten large half-portal frames of laminated Douglas fir, reminiscent of crucks. The copper roof is crowned by a lantern of fanciful shape. There is an equally fanciful west tower, which stands axially over the entrance. The overall plan is completed by a pentagonal north-west chapel and a large rectangular hall on the south. The facing material is grey-brown Leicestershire brick, except for the entrance hall and altar wall, which are of reconstituted Cotswold stone blocks, a contrast which reinforces the east-west axis.”

The key phrase is “planned for participatory worship”. The new building is designed to involve the congregation, to emphasise the Priesthood Of All Believers and to encourage lay ministry. There were other key novel features of the new building: a bell tower, convenient car parking and an integral, large church hall. The new vicarage was smaller than the old one, and so more convenient.

Other notable features are: the ceiling boarded with Afrormosia wood or African teak (now listed as endangered); the pews are made of Idigbo wood (also African, also now endangered); and the block floor is of Panga-panga wood (again African – but not endangered). The chandelier is Danish. The bell is dated 1614 and came from the redundant church of St Nicholas, Feltwell, Norfolk. It cost £400 to buy and transport.

Other than the colourful war memorial windows, the only large item to be reused from the old building was the stone font, which was placed just inside where the plate glass doors are now. As people used to trip over the plinth, a handyman trimmed off its stone edges with a powered stonecutter. When he had finished sawing, the inside of the church was completely white, which took the Mothers’ Union weeks to clean. In 1984 this font was sold to St Michael’s Abbey, Farnborough.

The brass cross dated Easter 1917 and matching candlesticks were brought from the old church. They were consigned into storage when the first wooden cross was mounted on the wall, also in 1984. (The candlesticks had not held lit candles since 1924.) The brass lectern – known as the ‘flat bird’ – came too, but its fate is unknown. Photos of the old church clearly show the wooden wall panels and the communion rail that are now in the chapel. The wooden cross in the chapel was specially made out of timber from the old church.

Changes to the new building

Apart from the sale of the font, there used to be a pentagonal pulpit where the grand piano is now, which was moved in 1985 to the organ side. There were pews for the choir, both by the organ and where the band play now. The chapel had pews and an internal porch until 1984. Lack of funds prevented the plan to raise the chapel floor to the level of the church floor. Surplus pews were stored in the tower. The office used to be a billiards room, which was made smaller in 1984 to extend the kitchen. The toilets were reorganised to make the first disabled-friendly loo. Installing a gallery was discussed at a time when Sunday morning congregations were putting pressure on the space available. The plan was rejected on cost grounds: the pentagonal shape is not easy to extend. Originally, the Armourplate glass doors at the back were the outside doors, set further a little further out than they are now. Since 1989, the entrance was moved right out to create the ‘Living Stones Room’ (the entrance), partly so brides can wait for their entrance in shelter. Since 2008, the communion table, communion rail and cross were replaced, the lighting renewed and the present carpet laid. The pulpit has been replaced with a hydraulic lectern. The flat copper roof was replaced in 2017 with a rubber membrane to keep out the rain, the lobby was widened to form a welcome area, the kitchen was refitted and 2 rooms were built where the stage was.

In 2017, Cadw listed St Mark’s Church for its special architectural and historic interest, as a good example of largely unaltered post-war church architecture.

Ask and it will be given to you; search, and you will find; knock, and the door will be opened for you. Matthew 7:7

JOIN US THIS SUNDAY
Go to Top